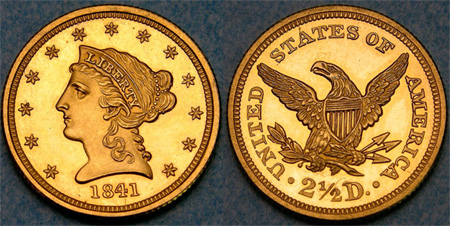 The 1841 Liberty Quarter Eagle (Buy on eBay) is a very famous proof-only issue with an uncertain history. Nicknamed the “Little Princess”, the original mintage was unrecorded, although it is estimated that perhaps 20 to 25 examples were struck in proof format. This was an unusually high number for the time, leading to a great deal of speculation as to the purpose and origins of the issue.

One researcher has suggested that the coins were produced for the purpose of presenting them as gifts to a group of foreign dignitaries who visited Philadelphia in 1841. This theory is not supported by the fact that nearly all examples of the coin were discovered within the United States. It is possible that some early numismatists understood the rarity of the issue, leading to demand for and eventual production of some restrikes. However, this is also unknown.

Circulated examples of the 1841 quarter eagle are known, in grades ranging from Good-4 through About Uncirculated. It has been concluded by most researches that these are in fact circulated proofs.

It is estimated that 15 to 18 examples of the 1841 Proof Liberty Quarter Eagle exist. The example pictured above resides with the Smithsonian Institution’s collection. An example graded Proof 65 Ultra Cameo by NGC was sold for $253,000 in June 2004.