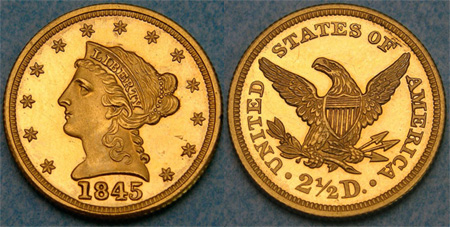 Proof Liberty Quarter Eagles (Buy on eBay) were struck at the Philadelphia Mint for each year of the series, including two years during which circulation strikes were not produced. There are a total of 65 different proof issues for the series, with those minted before 1858 extremely difficult to obtain.

From 1840 to 1858, proof quarter eagles were struck in limited numbers, ranging from an estimated 5 pieces to 20 pieces. All of these issues are extremely rare, with no more than a handful of examples for each date confirmed to exist in proof format. For certain years, not a single proof specimen is known to exist.

In 1859, mintages for proof quarter eagles were recorded for the first time and production levels slowly increased, although those of the 1860s and 1870s usually had less than 50 coins struck, with some issues having a proof mintage of just 20 coins. Most easily encountered the issues of the 1890s and 1900s, although it should not be forgotten that all Proof gold coins of this period are rare, and considered to be trophy coins by most collectors. The highest Proof mintage was recorded in 1901, when 223 Proofs were struck.

It should be noted that the later proof issues of the series were produced with a slightly different finish, and that they have a different appearance compared to the earlier issues.