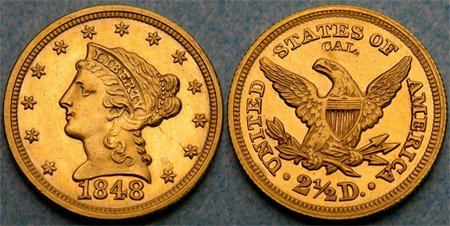 Many refer to the 1848 “CAL” Liberty Quarter Eagle (Buy on eBay) as the first commemorative coin of the United States. The issue is directly linked to the California gold rush and has an important place in both history and numismatics.

On December 9, 1848, the governor of California Colonel R.B. Mason sent 230 ounces of gold to Secretary of War William L. Marcy. This bullion was subsequently sent to the Philadelphia Mint where it was used to strike medals for Zachary Taylor and Winfield Scott along with specially produced quarter eagles. A total of 1,389 pieces were struck with the abbreviation “CAL.” stamped above the head of the each on the reverse. The letters were manually punched into the coin following its minting, although it is believed the die was still in the coining press when the letters were punched into the field.

It is estimated that no more than 150 examples of the 1848 “CAL” Quarter Eagle still exist. The coins were originally available at face value for anyone who requested them, however it seems that few numismatists were aware of the offering. As such, many pieces entered circulation or were otherwise lost to history.

As a tangible link to a historic era of American history, this is an extremely desirable issue. The low original mintage and survival rate also make it one of the scarcest issues of the series.

The finest known 1848 CAL Liberty Quarter Eagle is a piece graded NGC MS 68 with the star designation. Due to the incredible state of preservation and the proof like fields, it is speculated that this piece possibly resided in the personal cabinet of Chief Engraver James B. Longacre. The coin sold for $345,000 at an auction held in January 2008.